There are times when a good onboard experience makes up (at least in part) for less-than-satisfactory service on the ground, and might just spell the difference between a disaster and a merely unpleasant interlude. This was one such occasion.

Note: Schedule/route information, equipment type and other details are accurate only for the specific flight reviewed here and do not necessarily apply to previous or future flights, even by the same airline under the same flight number.

Philippine Airlines Flight 428 took off after a 3-hour delay. We were told that there were technical difficulties with our original aircraft, so we had to wait for another plane to arrive, unload its passengers, and undergo ground servicing before it could serve as the replacement. Luckily enough, I had upgraded myself from economy class to business at check-in so I could wait out the delay in PR’s Mabuhay Lounge, but this didn’t change the fact that the delay was a major inconvenience – one that ended up costing me the first day’s sightseeing.

Overall, I’d say we were pretty shabbily treated: vague apologies for the inconvenience, few explanations offered, no refreshments served, and – not such a bad thing in itself but insult to injury under the circumstances – a change in the assigned gate to one located some distance away from the first (in a terminal building without travelators).

When boarding finally began, passengers in business class and those with special needs were invited to walk into the plane first. No separate bridges for the front and back ends – everyone used the same door.

Even then, our ordeal wasn’t over. One passenger failed to present themselves at the gate and the plane had to wait until they were located; in the end, they didn’t turn up and their baggage had to be dug out and offloaded from the hold. This clearly wasn’t the airline’s fault, and it made perfect sense for the unaccompanied bags to be removed before take-off (to guarantee the safety of everyone on board), but on top of everything else this certainly felt like a rub of salt in an already gaping wound.

Now for the seats.

Not that I minded – in fact it made the cabin seem more spacious than if it had been just the 3 business rows on their lonesome – but quite remarkable all the same, especially since there seemed to be no difference in service between premium economy and economy on this short regional flight (apart from the better seats).

Whilst not nearly as luxurious or well-equipped as the CX mini-booths I sat in on a previous trip to Japan, PR’s business class seats are perfectly adequate for a short regional flight. The biggest issue is the lack of footrests or legrests – if I were a shorter chap my legs would end up dangling over the edge without any means of support (a recipe for uncomfortable numbness).

The meal table slides out from one armrest, whilst the centre armrest conceals a small cocktail table. 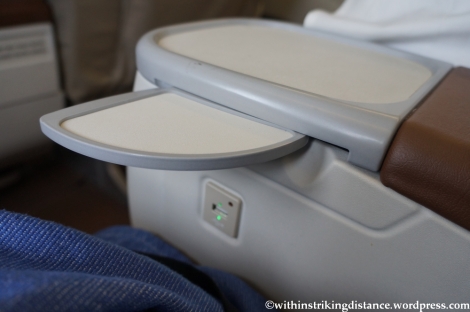 There’s also a USB port down there, though probably meant mainly as a charging station since there are no personal screens to feed video into.

PR may be upgrading services and equipment across its network, but there’s still evidence of cost-cutting all around. The lack of legrests is one (pretty basic equipment for a business class seat, I’d say), and another is the fact that the seat control panel only has one button installed (when there’s clearly room for more). 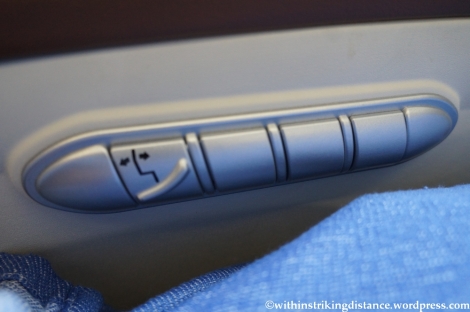 One last benefit of being in the forward cabin, far from the obstructing view of the wing, is the great vista to be had from the windows.

This small regional bird isn’t equipped with a built-in entertainment system: no AVOD, no personal screens, not even a shared overhead cabin screen (or none that I noticed at any rate). Another sign of PR’s cost-cutting scalpel at work?

To make up for this, iPads pre-loaded with movies, music, TV series and games are handed out for free. I think everyone in business class is entitled to one, and the rest are accommodated if there are units remaining. I suppose it’s not a bad stopgap measure for a relatively short flight, but there are obvious drawbacks – for one, there’s no secure place to hang or prop up the iPads on so one can’t use them freely whilst eating. (PR should really consider issuing seat-back hooks/mounts of some kind to make the devices easier to use hands-free.) And if one should fall asleep mid-movie . . . well, let’s hope the carpets are thick enough to keep them from smashing into smithereens.

There are the usual reading materials available – magazines and newspapers – but almost not worth mentioning as these should be considered standard-issue, even on budget carriers.

Business class passengers were served pre-flight welcome drinks. I settled on a mango smoothie, which I first tried on a PR flight to Bangkok a couple of years ago and fell in love with at first sip. 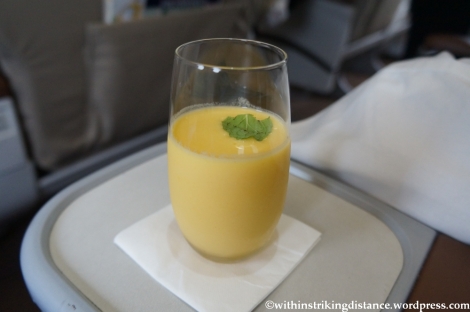 Before the meal, cabin attendants offered us more drinks and a bag of nuts.

There was an extensive beverage list in the menu – liqueurs, champagne, wine, 10 different kinds of beer, etc., even sake (no surprise considering the route) – but water suited me just fine.

Finally, our inflight lunch. PR’s revamped business class menus (branded the “PAL Master Chef Series”) are a collaborative effort involving 6 Philippines-based chefs; the menu for our flight bore the names of no less than 3 of them and offered a choice between a Western/Filipino or Japanese meal. After confirming with one of the attendants that shrimp wasn’t part of the menu (sorry, allergies), I settled on the Japanese option.

For comparison, here’s the hybrid Western/Filipino meal that I didn’t choose on this flight:

Except for the main dish and soup, all courses of the Japanese meal were served at once.

After I polished off the first round, the main course was placed on my tray along with a lidded bowl of hot miso soup.

I’ve enjoyed different kinds of Japanese food in different settings before, but never as a formal meal like this – and I must say, I really enjoyed the experience. Everything looked and tasted absolutely splendid, and the multiple tiny portions allowed for loads of variety without skimping on satisfaction. I could have done with a little more rice, but that’s just nitpicking.

Even the china service itself was quite nice to look at. I remember taking a few moments to lift the little Noritake porcelain dishes used for the early courses off the tray, holding them close to my face in order to admire the delicately painted patterns up close.

I was also offered warm bread from a tray – not exactly part of traditional Japanese cuisine but quite good nonetheless. (I assume the galley had quite a bit left over from the Western course.) Light green tea was poured out along with the other beverage options on the menu.

Next came dessert. I finished off the two Neuhaus chocolate squares on the tray (mmm), then out from the galley came a bowl of sans rival and a small tub of ice cream.

The sans rival was quite delicious, though it seemed to have suffered a bit from extended storage (slightly soggy texture in parts), and I imagine others might find it too sweet. But I’ve got a sweet tooth so it scores well on that point.

All things considered, I was very pleasantly surprised with the quality and quantity of food on offer. Slightly larger portions would be nice, but after the hearty breakfast I enjoyed earlier in the airport lounge, even my infamously capacious stomach felt quite full after dessert. This probably ranks as the best inflight meal I’ve had in recent memory, in some respects surpassing even the ones I enjoyed on my CX business class flights last year (and those were pretty good).

PR’s handling of the delay may have been far from satisfactory, but the excellent service I received from their cabin crew came very close to wiping off the stink from the earlier mess.

The flight attendants were attentive, but not intrusively so, politely offering this or that and anticipating needs without seeming to hover permanently at one’s shoulder. There was also a certain warmth and sincerity in the attention provided, a real feeling of hospitality, not just cold butler-like professionalism (of the sort I experienced in another airline’s business cabin).

Another nice touch was the amenity kit I was offered after boarding – not something one normally expects on short regional flights. This one contained an oral hygiene set, socks, and eyeshade, all bundled into a zippered pouch.

Better, in my view, if they invested the amenity kit budget into a proper AVOD system for the aircraft, but I do appreciate the gesture.

Whilst PR’s handling of delays leaves much to be desired (unless ours just happened to be a bad outlier), I’m glad that the onboard service is on par with, and in some respects far better than, its larger and more famous competitors. I’ll have to think twice about flying with them again given their lacklustre performance on the ground, but the very pleasant memory of my airborne experience might just tip things in their favour if the prices and timetables are right.