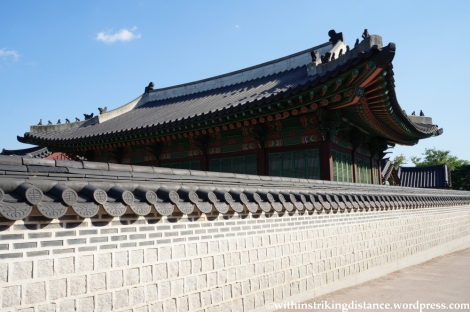 After a delicious (if somewhat hurried) lunch, our merry band of travellers hopped back onto our waiting minibus for the next part of today’s Seoul city tour.

Our last major stop was Changdeokgung, another jewel in the glittering collection of palaces that the Joseon kings amassed over the centuries.

I was here earlier in the year during my winter holiday in Seoul (please refer to that post for background and context), so I’ll tune out the usual commentary and hop straight into the gallery.

Our guide then brought us to the entrance of the famed Biwon (Secret Garden), Changdeokgung’s star attraction. Set in the wooded hills rising just behind the public area of the palace, the garden features fine examples of royal architecture scattered across a landscape that’s been left as close to nature as possible.

The garden walk takes visitors through some very hilly terrain, which can be very taxing for some. In fact, our guide mentioned that of all the tour groups she’d taken to see the garden, only 3 have managed to complete the full course. (We finished the walk, so that makes us #4 – huzzah!)

Having already presented a detailed commentary for my winter visit to the garden, I’ll just go ahead and spread out the pictures for our enjoyment.

From here, we were taken to Insa-dong for a shopping excursion. As before, our merry band split up into smaller groups, with my sister and I dashing off to search for souvenirs and the obligatory gifts for people back home.

We were too busy browsing amongst this shopping street’s innumerable offerings to take pictures (check out my earlier post from the same trip for some snapshots), but we definitely gave the place a good scouring, happily hunting out inexpensive but lovely trinkets to take back with us.

I highly recommend one store in particular: Myung Sin Dang, a splendid little establishment with quite a bit of history (Queen Elizabeth II is just one of many royals and other dignitaries who’ve passed through their doors) that sells brushes and all manner of writing supplies. But the single best souvenir you can get from this shop – and, in my view, possibly in all of Seoul – is something light and portable, yet can be put to good use for years.

First, we need to locate the shop. (Aaargh, why didn’t I take pictures . . .) The official KTO website has the address (scroll down a bit until you find the entry for “Myung Sin Dang Brush Store”), and The Korean Way blog has a great picture of the storefront (look for the big brush hanging near the sign).

This store specialises in brushes – and they do have a lot of those on offer – but they also sell dojang: traditional seals that are often, as in this shop, hand-carved from stone and other hard materials. Like Japan, Korea has a long history of using personal seals for everything from correspondence to business transactions, either in addition to or instead of a signature. Although we don’t normally use seals in my corner of the world (except for those stamped or embossed versions that one sees on certificates and such), my sister and I thought that it would be great to commission our very own seals as a durable souvenir of our visit.

Jonathan Jamieson has an excellent illustrated write-up on his personal site that describes the whole process, from choosing the material for the seal to giving it its first stamping (and of course, the noteworthy process of seal-carving in between). I might add pictures of my own dojang to this post in due course, but in brief, my sister and I selected a lovely green jade-like stone for our seals with a working surface of about 1 square inch. This cost us 50,000 won each (close to US$50) – not bad at all, though you could go significantly cheaper with smaller or less desirable material, and of course you could also go very far in the other direction with massive seal matrices costing upwards of several hundred thousand won. (The carving fee is included in the price of the material, by the way.) I also bought a pot of red seal paste in a lovely lidded ceramic bowl for another 19,000 won (I think); regular stamp pads will work (as my sister has done with hers) but I prefer the deep rich colour of the traditional stamping material.

The seal carver can make an inscription in Roman letters (as the above-mentioned blogger did with his), but we chose to have our names written in hangul. This gave our dojang a nice Korean touch, and the exotic appearance of the characters on the stone actually lent a certain artistic flavour. If you’re not familiar with hangul, not to worry: we simply gave our names in Roman letters, pronouncing them as we did so, and a staff member sketched out the Korean versions for us.

Except for larger seals or complex designs, the carving process takes a fairly short time, and our seals were ready by the time we had to report back to the tour bus. A great – and lasting – souvenir of our time in Korea, one that will grace Christmas cards and letters for many years to come.

By the time we got back to our hotel, lunch had digested away into a vague, happy memory and our stomachs were demanding to be stuffed with more Korean goodies. Now for something that the denizens of this city do best: a hot, heaping, hearty helping of street food.

Vendors peddling freshly-fried pedestrian treats are a common sight in the Korean capital, but a particularly large concentration of them can be found in one place: the crowded covered streets of Gwangjang Market, in Jongno-gu.

There’s lots of merchandise on hand to tempt both serious shoppers and bored browsers, including massive piles of shoes . . . 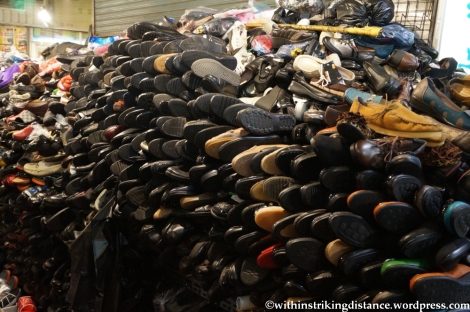 . . . but when the sun goes down and the lights flicker on, the narrow streets fill with starving Seoulites on the prowl for something less durable – and far more edible. 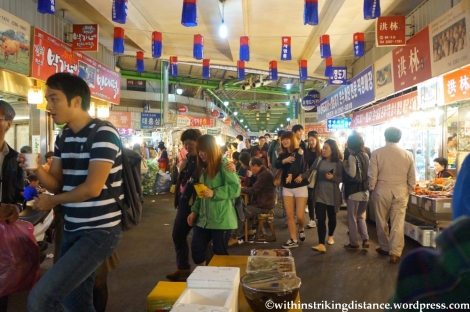 Catering to this cheerful demand for delicious dinners are scores of food stalls, many of them one-man operations equipped with little more than a counter, a small kitchen, and mounds of mouth-watering morsels ready to be wolfed down by the waiting crowds. 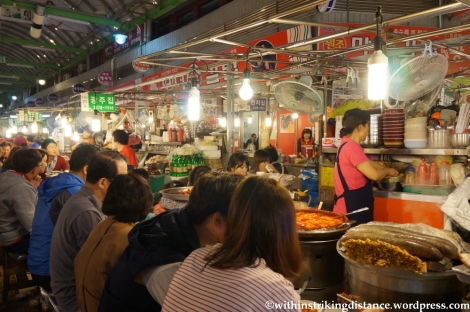 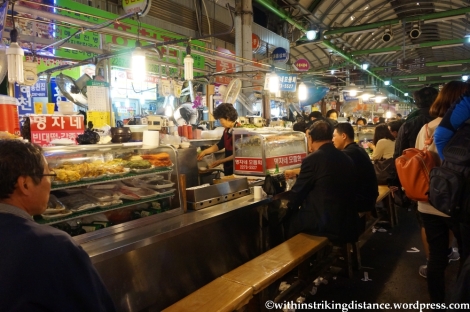 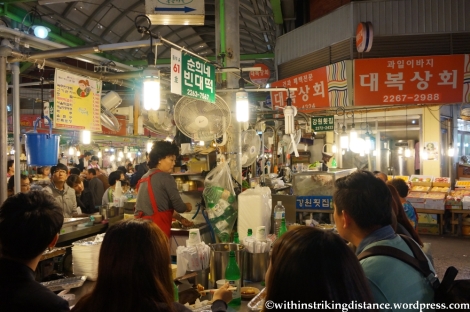 The variety of food on sale here is simply mind-boggling, as the next image of a typical stall clearly illustrates. Staples such as tteokbokki and gimbap sit alongside more exotic offerings like pig’s trotters and sundae. And by sundae, I don’t mean the kind with ice cream – I mean the kind with blood that comes in hog intestines. Mmm. 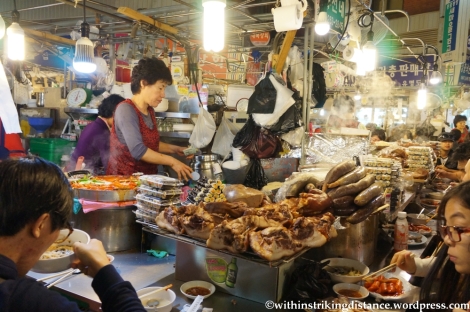 But the most prominent member of the local food hierarchy has got to be the splendidly scrumptious bindaetteok: a fried pancake of ground mung beans mixed with various other ingredients. 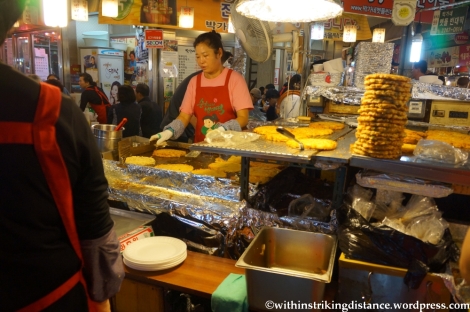 Here they are in their nascent form: mung beans, soaked in water and finely mashed up in a stone grinder. 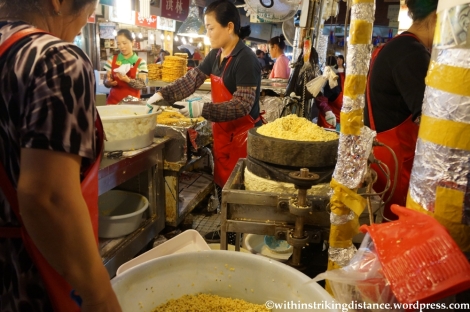 Into the deep fryer, which turns the mash into golden-brown pancakes. 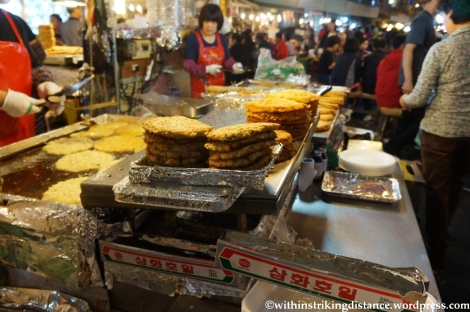 Finally, the mouth-watering end result, all ready to march into our waiting stomachs. 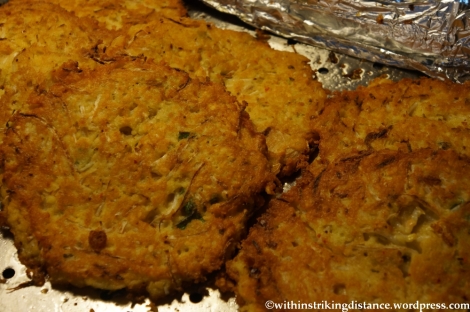 There are also specialised shops selling the sort of unidentifiable edibles (at least, I think they’re edible . . .) that make a visit to an Asian market such a rewarding experience. 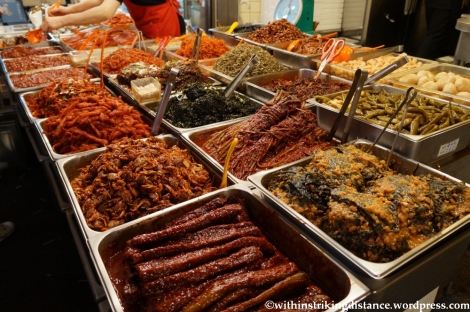 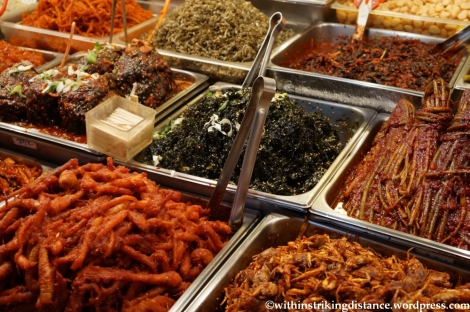 (Reminds me of the time I strolled through Kyōto’s Nishiki Market – another gold mine of the weird and wonderful.)

We were feeling quite knackered after our long day of sightseeing, so my sister and I bought some bindaetteok and gimbap to take away for consumption in the peace of our hotel room. But if you’re the more sociable type, it’s probably best to do what my brother and cousins did: grab a seat at a counter and enjoy your freshly-cooked meal whilst hobnobbing with the locals. Language proved no barrier in their case – the other customers, clearly amused by the sight of three young, noisy foreigners shamelessly plonking themselves right in the thick of the action, interacted as best they could and even went so far as to offer them free food. They tried everything that was set before them, even the sundae which they saw a local kid enjoying with relish . . . although their reaction when they realised they were chewing on blood sausage was absolutely priceless.

As for myself, I was quite content to munch on my massive mung-bean pancakes, relax with a bit of Korean TV in the background (never mind that I hardly understood a word of it), and slowly drift off into the peace of a good night’s rest.