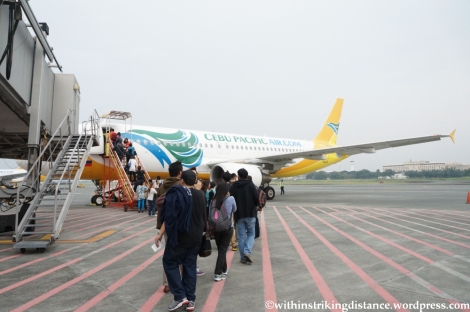 But when all one needs is an inexpensive way to get from A to B, it’s hard not to be thankful that we’ve now got loads of budget options to consider.

And as I experienced this past October on a quick 3-hour flight to Korea, the results aren’t always bad. (Well, not as bad as one might have feared, anyway.)

Our flight with Cebu Pacific from Manila to Seoul was scheduled to depart from Terminal 3 – the largest, newest, and (probably) least decrepit of Ninoy Aquino International Airport’s four terminal buildings. The unfinished structure was clearly a work in progress: few decent dining/shopping options, no proper lounges, large sections boarded up, and some equipment not yet functioning. Still, it was a darned sight better than the decaying hulk of Terminal 1 (from which I took my Cathay Pacific flight to Japan earlier this year), and I expect conditions to improve significantly once the whole building is fully operational.

In any case, Cebu Pacific had better enjoy their tenancy whilst it lasts: there’s talk of throwing up a budget terminal elsewhere in the airport and they’re bound to get transferred out of these (relatively) high-end premises when that happens.

The terminal may have been a (slight) cut above average, but the pre-flight experience as a whole left much to be desired. Our boarding gate was changed at the last minute to another one some distance away – normally not an issue in itself, except that this vast building had no operating travelators. As we were waiting for boarding to begin, I overheard a staff member say to the pilots (who were sitting within earshot of me) that there’d been an equipment change and that our new bird was still on its way in. In the end, the appointed time came and went, the gate finally opening ten minutes after we were scheduled to depart.

Off we went, down the long ramp that led from the departure gate to the jet bridge . . .

. . . only to find the boarding door at the end tightly shut, and a side door leading to the outside thrown wide open. Apparently the jet bridge was currently inoperable and we had to board our aircraft the old-fashioned way.

So it was that we descended onto the tarmac, marched over to our waiting A320 . . . 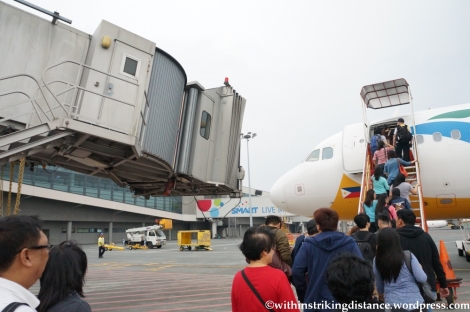 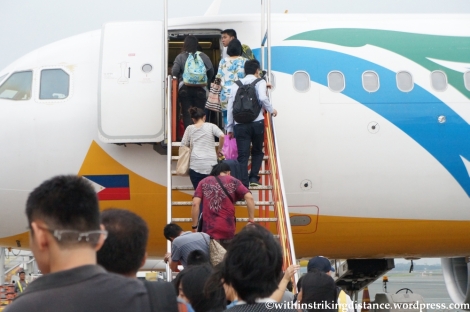 For some of us – and certainly for me – it was actually a rather interesting change from the usual. Boarding planes via enclosed metal tubes may be modern and safe and all that, but there’s nothing like the sense of wonder that a full-on view of a large jetliner can evoke in a passenger: a view that isn’t really possible the way that planes are loaded in this day and age.

Having said that, I wonder how infirm and elderly passengers might be expected to manage in this situation. I didn’t notice anyone having serious difficulties with the boarding arrangements on this particular flight, but if the airline had been advised beforehand of clients with special needs, I’d be interested to know what sort of assistance they would – or could – have extended.

In due course, we were cleared to pull away from the gate and fall into the queue for take-off.

Yes, I mean that literally: there was a queue of planes waiting for their turn at the main runway.

Small wonder we ended up taking off over an hour after we were supposed to.

Remember the excellent lie-flat, uber-sophisticated business class seats I flew in on my Cathay Pacific flights to and from Japan last April?

Well, do your best to forget about those, because this flight had nothing like that. All we had were these. 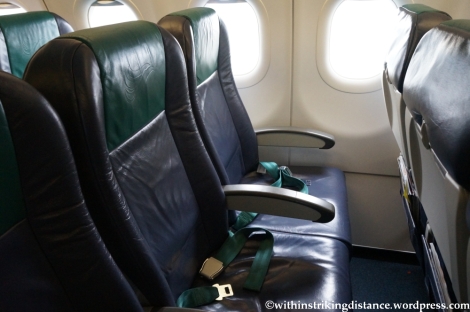 Cebu Pacific’s cramped A320 seats, which were packed three abreast with only a minimum of legroom between rows . . . 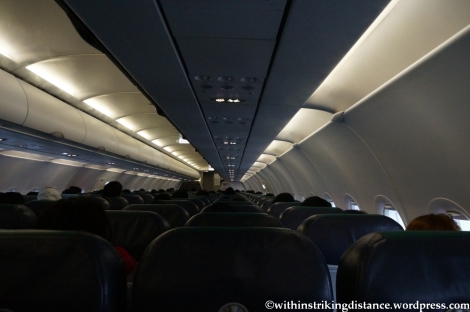 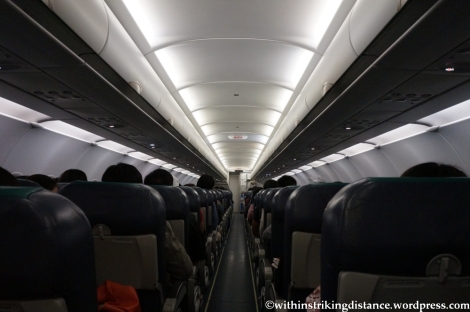 . . . turned out to be surprisingly comfortable. Of course, let’s not kid ourselves: I wouldn’t want to spend more than a few hours on these, especially with the poor recline and appalling absence of entertainment options. But for a short regional flight of no more than four hours’ duration, I was actually quite satisfied with the seats, and might have even survived a somewhat longer flight simply by sleeping away the hours.

Then again, if I were a significantly larger chap, I’d probably find the conditions not far short of claustrophobic. In that case I’d be slapping myself silly with regret if I didn’t shell out the extra cash for an extra-legroom seat near the front or along the exit rows.

Also, a word of caution: try to avoid the seats closest to the lavatories. At one point during the flight, a lethal cloud of unpleasant odour began to seep into the cabin from the facilities at the back of the plane (no doubt after a fellow passenger or two had done their evil business on the thrones in those parts). Amusingly, the woman across the aisle from us thought it might have been from the can of cheese-flavoured snack food she’d just opened, though after cautiously sniffing the contents of the canister, it dawned upon her that not even the foulest-smelling variety of Limburger ever fashioned by the hand of man would reek of the stench that was filling our nostrils.

If this flight had been any longer than it was, there might have been a queue at the doors formed by passengers desperate to hurl themselves out into the fresh air beyond (steep fall notwithstanding).

Unless you’re generous enough to count a battered copy of the airline’s inflight magazine as entertainment, don’t count on getting any in-seat fun for the duration of your flight. Cebu Pacific’s cabin crew are famous (or infamous, depending on who’s talking) for running inflight games like “bring me [item of their choice]”, which might be good for killing a few minutes but still leave hours upon hours wide open for boredom to take over.

My advice: close your eyes, get some sleep, and the flight will be over before you know it.

If you’re willing to pay the equivalent of about 8 USD, Cebu Pacific offers a variety of hot meals for your enjoyment (along with a complimentary beverage for pre-orders).

On the other hand, if you’re unwilling to pay an extortionate price – which 8 USD most assuredly is, considering what it will get you (even if it’s barely more than pocket change under different circumstances) – to be served a ridiculously small portion of food and a tiny drop of juice, then Cebu Pacific offers you absolutely nothing. Nothing. We even had to pay for water.

Welcome to the wonderful world of low-cost airline travel.

Friendly, though not fawning – again, this is a no-frills airline we were flying on. For all we knew, their flight attendants might have been the most caring, attentive specimens of humanity in existence; there just wasn’t much scope for them to demonstrate this to the passengers (given the limited service offered on board).

Budget carrier travel has a reputation for creating memorably hellish experiences amongst the travelling public, and my experience will do nothing to dispel that notion entirely. Still, for what it’s worth, I’d rate this flight a moderate success. On a short regional flight like the MNL-ICN route, one doesn’t really need much from the airline and its staff: a seat comfortable enough to nap in will usually be sufficient, and I believe I got at least that much.

In addition, whilst the initially low price tag for a budget flight can quickly skyrocket due to ancillaries like extra baggage and food, it really can be a major money saver if one is careful to pay only for what’s absolutely required. After adding only the barest minimum of check-in baggage allowance and skipping such things as meals and seat selection fees, we kept the cost of our tickets to a level that made the whole experience (unpleasant parts and odours included) just about acceptable.

All things considered, I will fly with Cebu Pacific again on this route – but only if the low promotional fares we paid at the time are still available. Any higher by a certain margin (say, 100-150 USD more) and we might be better off flying with a non-budget carrier that offers better service and perks.

One might characterise this as “overkill”, having nearly all elements of the Re-ment よきかな和の暮らし set laid out together like this. In future I intend to rotate pieces in and out, to match the mood and seasons (along with the other miniatures I’ve already acquired and have yet to acquire). That said, the eye-popping detail in these minute reproductions is really quite astounding. #リーメント#リーメントぷちサンプル #リーメントよきかな和の暮らし #rement #miniatures
The fun part was opening each box, not quite knowing what was inside. The not-so-fun part was assembly and sticker application (for some of the more complex elements). Made me wish I had a pair of craft tweezers and a good set of magnifying lenses. #リーメント #リーメントぷちサンプル #リーメントよきかな和の暮らし #rement #miniatures
The room pieces I was waiting for have just arrived from Japan, and I’ve now joined those up to the previous set to create this larger 和室. Next step: crack out the other as-yet unboxed miniatures I’ve been accumulating and furnish this space. #リーメント #リーメントぷちサンプル #リーメント和室 #rement #miniatures
I had to pick up a new hobby to take my mind off things…so I settled on collecting Japanese miniatures. This little 和室 by Re-ment will soon be joined by another room piece in the same series (still en route here from Tōkyō): a fitting backdrop for the minutely reproduced art, food and fittings that I’m now itching to break out of their boxes. If I can’t go to Japan, I’ll have to bring Japan here…as scale models, anyway! #リーメント #リーメントぷちサンプル #rement
Ordered stuff from Amazon Japan for the first time in years. This wouldn’t have been necessary were it not for this darned pandemic, since I used to fly there twice or more every year and it was always easier to buy books or anime merchandise or whatever else I wanted during those visits. Can’t wait to raid Maruzen and Kinokuniya and Animate and Mandarake and that fantastic but expensive shop in Tōkyō National Museum and all my other usual haunts IN PERSON once this awful emergency is over. 😆
お帰り、#しまりん 。#ゆるキャン
Took a while for these to get here. Time to put them through their paces. #apple #airtag
Concéde, quǽsumus, omnípotens Deus: ut, qui hodiérna die Unigénitum tuum, Redemptórem nostrum, ad cœlos ascendísse crédimus; ipsi quoque mente in cœléstibus habitémus. #ascension #ascensionthursday #ascensionalwaysfallsonathursdayneveronasunday