Walking deeper into the garden, I was struck by the silence and the stillness of the snow-covered scenery all around me. We were right in the heart of Seoul, one of the world’s busiest cities, yet standing here I might as well have been hiking through a remote stretch of countryside far beyond the reach of the 21st century. No traffic noise, no heaving crowds: just the faint crunch of freshly-laid snow under my feet, the clear calm air of winter, and the woven arms of the innumerable trees, mercilessly shorn by the harsh season of any leaves that might break the progress of the warm sunlight filtering onto the cold skin of my face.

It feels rather odd to be writing this, an account of a trip I took many months ago – perhaps because I walked the same path I am about to describe just this past weekend. On that (more recent) occasion, autumn was well in progress and the scenery our group encountered was very different from the winter vista we’re about to see here.

In any case, there will be a time and a place to speak of my latest visit. For the moment, continuing from my previous post, I invite you to walk with me as I recount my wintertime stroll through the uniquely peaceful “secret garden” of Seoul’s Changdeokgung.

From the more public side of this stately royal complex in the South Korean capital, a passageway through the former residential compound of the crown prince brought me to the entrance of the palace garden. But this wasn’t just any palace garden. As the private retreat of the king and his family, it’s no wonder the place – formally known as the Huwon (Rear Garden) – earned the romantic epithet of Biwon (Secret Garden).

Remember to bring a little extra cash, as the basic palace entrance ticket won’t cover the garden. (Admission will set you back an extra 5,000 won.) In addition, visitors are required to join a guided walk in one of several available languages, with fixed schedules – no private wanderings are permitted.

Also, a word of caution: the Secret Garden tour takes you through some rather hilly terrain, along a winding course with lots of slopes and stairways. Winter posed special difficulties, with many of the paths slick with ice and packed snow; even with hiking boots it took a fair bit of effort to maintain my balance.

The air was bitterly cold, but that didn’t deter a fairly sizeable number of tourists from turning up for the 15:30 English-language tour.

Our first stop was a cluster of buildings around a square-shaped pond. Situated on top of a terraced hillside, the grand Juhamnu pavilion – used as a royal library – offered the king a calming vista whilst he engaged in literary pursuits.

Note the three gates in front of the pavilion. 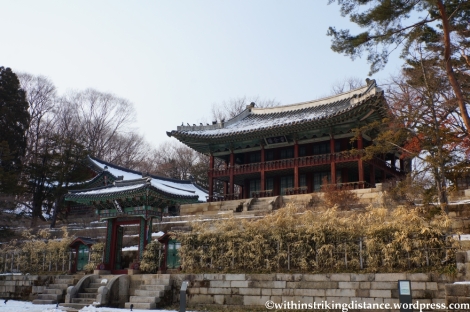 The middle one’s a no-brainer. As the tallest, largest, and most elaborate in the set, it was clearly reserved for the use of the king. As for the shorter ones on either side, the guide demonstrated their purpose by asking a volunteer to go up and stand right next to one. With the visitor’s head close to brushing against the low canopy, the explanation was more easily understood: the side gates were short enough to force many of those passing through – indeed, probably anyone of average height crowned with one of those tall hats worn by Korean nobles – to bow slightly before gaining entrance. In other words, a salutary lesson in humility for His Majesty’s subjects.

The pond at the foot of Juhamnu – named Buyongji – was quite beautiful to look at, with a pristine white coverlet of ice concealing the water underneath, and the elegant little Buyongjeong pavilion perched upon one edge. 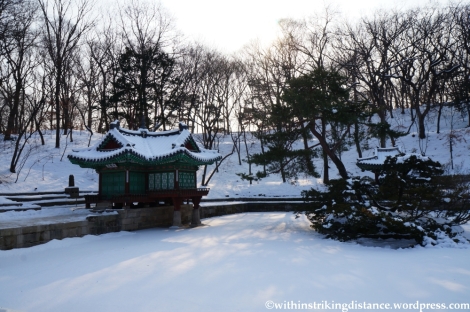 Like the Juhamnu gates, the pond’s design wasn’t merely based upon aesthetic considerations, but also contained a message for those gazing upon it. 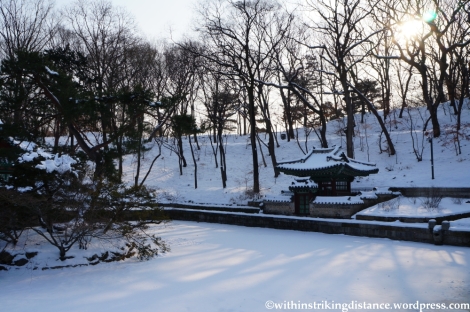 Note the layout of the pond: square (more precisely, rectangular bordering on squarish) with a round island near the middle. This was a lesson in Korean cosmology, executed in stone – a reflection of the East Asian concept of a square earth and round sky.

Close to the northeastern corner of Buyongji was the Yeonghwadang pavilion . . .

. . . which faced an area of open ground. On certain special occasions, state examinations were held here in the presence of the monarch, who presided from the pavilion as the examinees hunched over their papers in the yard.

Standing around this open area was the garden’s only full set of visitor facilities: some benches, a small shop, and most importantly, lavatories. Incidentally, these are the last lavatories you’ll encounter before the group moves on, and there’s quite a long way to go after this point. (Needless to say, carrying out one’s business amongst the trees is severely frowned upon, and might even be illegal given the historic garden’s protected status – don’t risk it and do whatever needs doing right here.)

All right, break time’s over. Let’s press on.

North of the Buyongji complex is the Uiduhap pavilion, a relatively modest structure of unpainted wood. 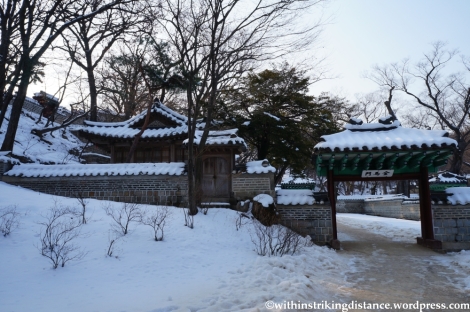 A little further on stands Bullomun, a small monolithic portal whose name apparently means “The Gate of Never Growing Old”, or something to that effect.

Whilst originally intended as a prayer wishing the king long life, doubtless the rather poetic name entices not a few visitors to dart through it and back, desirous of attaining eternal youth.

Bullomun was the main access point for another pond, Aeryeonji, with the Aeryeonjeong pavilion guarding its northern edge. 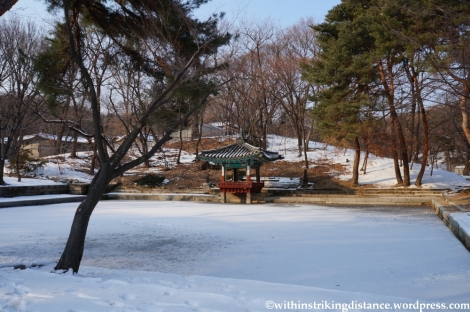 Walking deeper into the garden, I was struck by the silence and the stillness of the snow-covered scenery all around me. We were right in the heart of Seoul, one of the world’s busiest cities, yet standing here I might as well have been hiking through a remote stretch of countryside far beyond the reach of the 21st century. No traffic noise, no heaving crowds: just the faint crunch of freshly-laid snow under my feet, the clear calm air of winter, and the woven arms of the innumerable trees, mercilessly shorn by the harsh season of any leaves that might break the progress of the warm sunlight filtering onto the cold skin of my face. 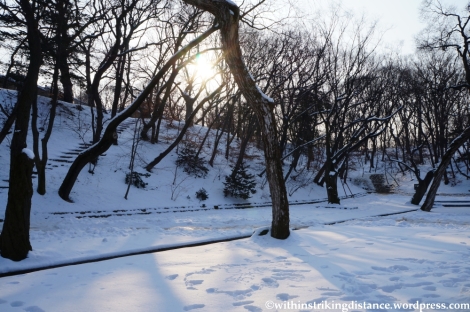 One begins to understand why the Joseon kings laid out the Secret Garden the way they did: dotted with ponds and pavilions, yes, but in many respects consisting of seemingly untrammeled nature, with thickly wooded slopes and steep hills dominating much of the landscape. Here, secluded from the interminable intrigues of the outer palace, surrounded more by trees than by fawning courtiers, their ears filled more with birdsong than with the whispers of bureaucrats, the overburdened monarch might hope for a moment’s peace as he retreats – however briefly – from the demanding affairs of state.

Nestled in the woods was a small compound of buildings where the king and his family might attempt such a withdrawal from the daily grind. Beyond this gate and perimeter wall of unpainted wood, earth, and stone . . . 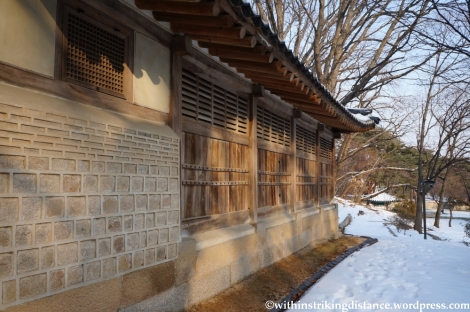 . . . we found Yeongyeongdang, a ceremonial hall patterned after the Joseon ideal of a scholarly nobleman’s residence. With all the features of an upper-class home – including separate gates and compounds for men and women, and even an ondol system for keeping the house warm in winter – the illusion of stepping down from the world of royalty to the world of “mere” nobles seemed very complete indeed. (One suspects that this is about as far down as the royal family might be expected to dress down to; slumming it in pure commoner fashion is likely too much of a leap.) 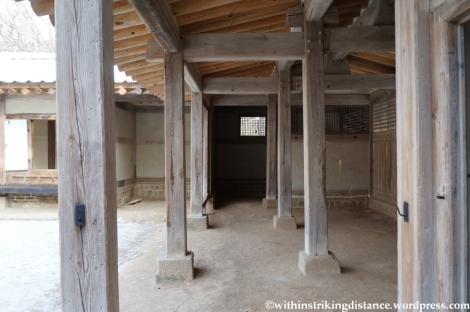 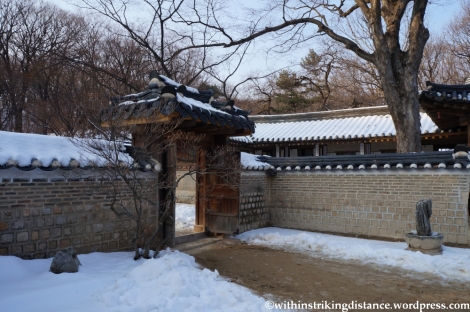 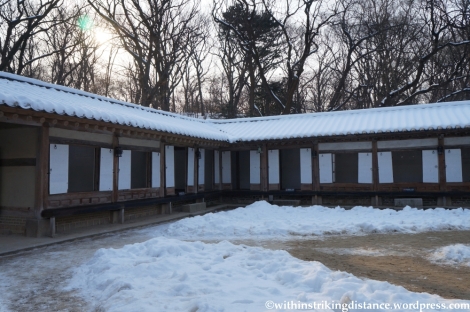 On the eastern side of the compound stood Seonhyangjae, used as a study. 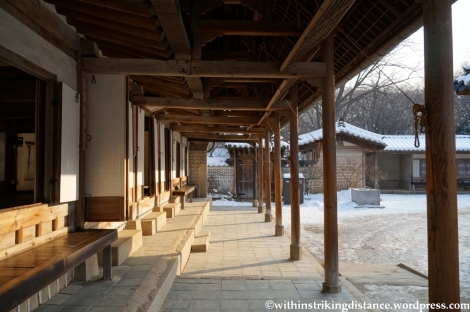 Presiding over the whole complex of buildings from its lofty garden perch was the lovely little Nongsujeong pavilion. 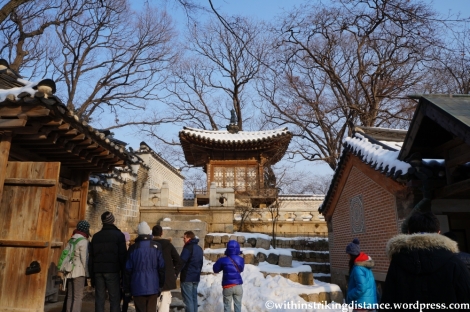 Not far from the nobleman’s house, we encountered a small group of pavilions clustered near two ponds. 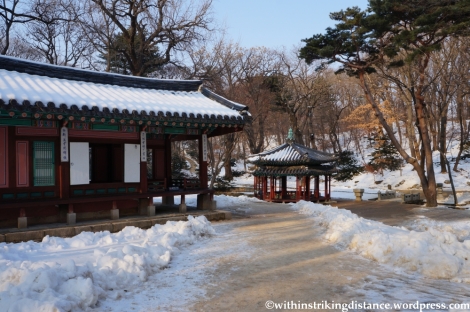 The oldest member of the group, dating from 1644, is the attractively double-roofed Jondeokjeong. 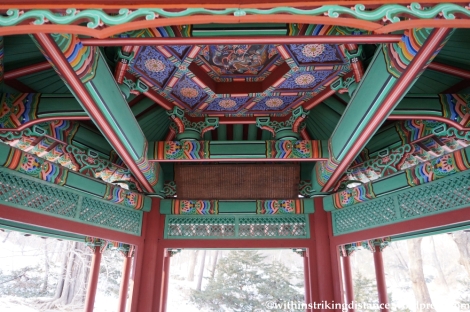 From here, we continued our trek into the deepest, most secluded part of the garden – something that the greater mass of the king’s subjects could never have hoped to see.

As we approached the palace compound’s northern perimeter wall, we came upon another group of pavilions, this time placed near a small brook named Ongnyucheon. 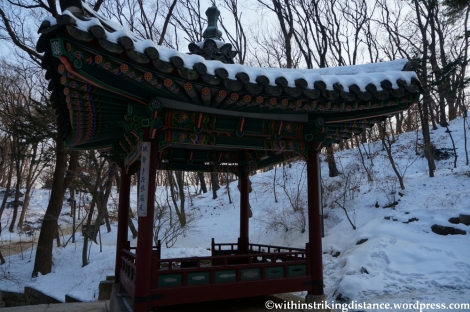 Perhaps the most interesting one in the cluster is Cheonguijeong, a round pavilion with a unique thatched roof.

Here, in this secluded collection of pavilions, as far removed from the hustle and bustle of the front palace as possible within the confines of the defensive wall, with the gentle rippling notes of a stream and the soft rustling of a breeze through the branches overhead to drown out whatever persistent cries of the outside might fly across the vast hilly woodland shielding him from the chaos of his realm, perhaps even a king might find his moment of peace.