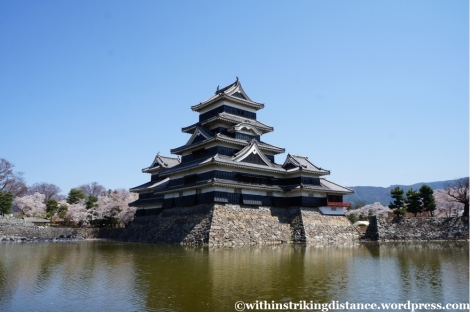 Where Diego visits one of Japan’s most iconic castles, nibbles on French pastries, and enjoys a train ride with some of the best views a JR ticket can buy.

My day in Matsumoto began with breakfast, followed by a long but easy morning stroll from my hotel (near the main railway station) to the city’s famous castle.

The city itself is very much like other midsize urban areas elsewhere in the country: low-rise, architecturally bland, and spotlessly clean. The streets were refreshingly quiet – no surprise as it’s a Saturday morning – which made for a relaxing, trouble-free walk through neighbourhoods that seemed as if they’d been pulled straight out of a slice-of-life anime. 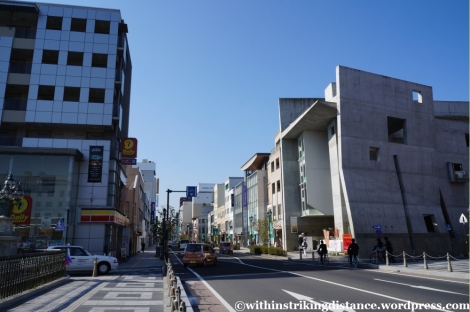 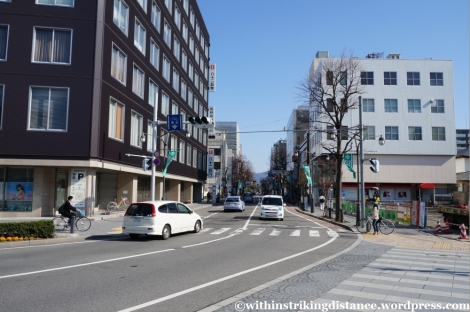 Downtown may have been a sea of featureless utilitarian structures, but there were a few interesting oddities here and there. The next specimen’s a bank building from the 1930s, which now forms part of the Matsumoto Marunouchi Hotel (formerly the Hotel Harmonie Bien).

A few steps further down the street stands this little old bookshop, squashed between two larger buildings like the house in Stuart Little. Seikandō – learn more about it from the last entry on this linked page – sells old books and prints, and peddles a touching bit of history as well.

Back in the 1950s, when Matsumoto Castle was undergoing restoration work (which would not be completed until 1955), the shop owner took pity on those who came all this way only to see the once-spectacular fortress covered up in scaffolding and inaccessible to visitors. His solution was to remodel the store into a tiny replica of the castle – roof ornaments and all – perhaps to give them something worth looking at during their stay in the city. A good effort (note the detailed architectural elements) and one that endowed his neighbourhood with a charming landmark of its own for tourists to admire.

A few minutes later, I was rewarded with my first view of the real thing.

This being Nagano Prefecture, the snow-capped peaks of the Japan Alps are never too far away.

I entered the Honmaru, the castle’s innermost enclosure, through the aptly named Kuro-mon (Black Gate). 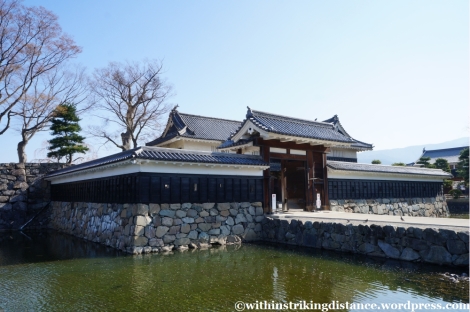 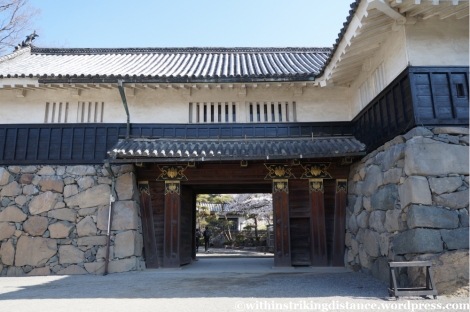 Once through the gate, I looked across the wide grassy expanse of the Honmaru and saw the tenshu (main keep) standing proudly at the other end. Back in the castle’s heyday, the scene would not have looked as empty as it does today: a lavish palace complex and associated buildings would have stood between me and the tower, filling a large part of the space now taken up by the neatly trimmed lawn.

Most of the tenshu was constructed in years 2-3 of the Bunroku era (1593-1594). Although many outlying structures of the castle compound were torn down during the Meiji period, the main keep itself barely managed to survive through the efforts of private individuals. Two massive restoration projects – one in the early 20th century and another in the 1950s – resulted in the iconic tower regaining much of its former glory. It’s now one of just a dozen or so original tenshu in Japan to have survived centuries of war and the Meiji government’s dissolution of the han system (which brought about wide-scale castle demolitions all across the country). 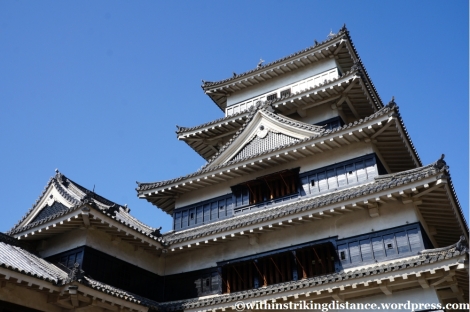 Very nice exteriors – but we can’t miss the inside as well.

The windows offered great views of the surrounding castle compound, though this often meant having to poke my camera lens through the stout grilles for a clean shot. That down there (in the next picture) is the famous red bridge that features in many photographs of the castle.

In due course, I arrived at the sixth floor of the castle.

Nestled within the roof beams above me was a small shrine, said to have been created to protect the castle from fire and enemy attack.

Back down to one of the lower levels, I made my way over to the Tsukimi-yagura (moon-viewing turret), a later addition to the main keep. The room has sliding panels that open onto views of the castle grounds towards the east, north, and south. 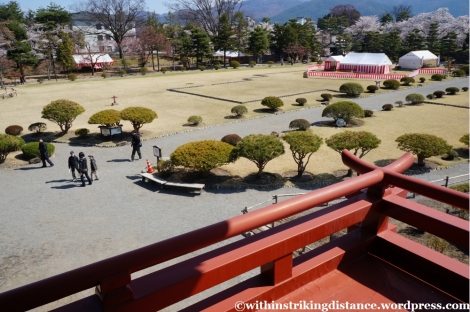 I reemerged into the bright spring sunshine and went on a leisurely stroll around the Honmaru. 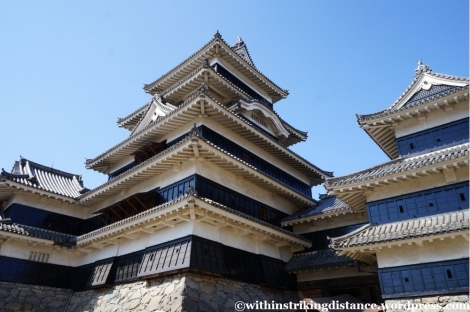 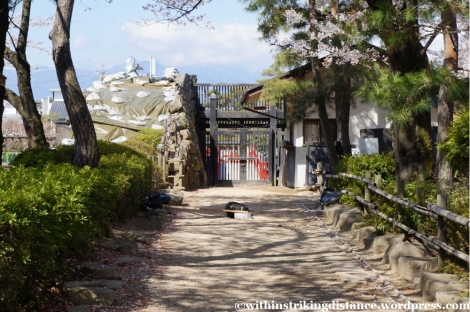 The cherry blossoms may have started to fall – or fallen completely – in Kyōto and other regions, but the season starts (and ends) a little later in the cooler climes of the Japan Alps. This meant that there were still a lot of trees in bloom to sustain the hanami season in and around the castle.

I pity the poor labour gang tasked with hauling this massive rock into place.

The rock forms part of the stone base of the Taiko-mon (Drum Gate). Originally constructed in Bunroku 4 (1595), the gate was demolished in 1871 and wasn’t completely rebuilt until 1999.

The Ninomaru Palace (one of three grand residential structures in the castle complex) once stood nearby. The wooden buildings are long gone, but their outlines have been marked out on the ground and a cut-away diagram posted on a board allows visitors to imagine the splendour that once was.

A walk along the castle’s outer moat gave me a splendid opportunity for more hanami. 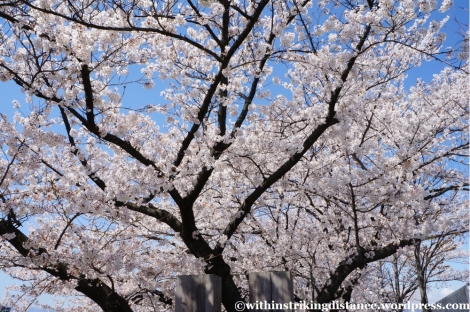 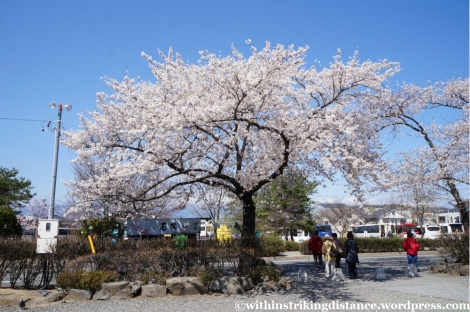 As I made my way round, I eventually came to the elegant red bridge that many probably consider an essential part of the classic Matsumoto Castle view. Unfortunately, there was a major restoration or maintenance programme underway during my visit so the vista wasn’t quite as unspoilt as one might have hoped. 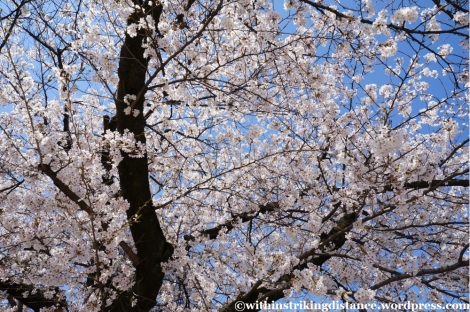 Onwards then, around the inner moat – and snapping more images of the castle along the way, of course. 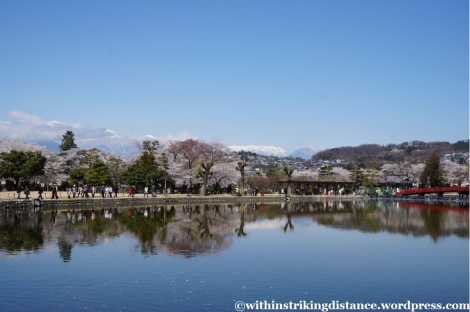 I also visited the city museum not far from the castle – drab-looking on the outside, but with fairly interesting exhibits on the inside.

Right, time for lunch. I dropped by a tourist information office and picked up a map with suggested restaurants, but didn’t find the specific soba restaurants I was aiming for (soba is one of the prefectural specialities). No matter – I returned to the train station, bought a smoothie and an assortment of pastries from a French cafe, and settled down for my midday meal.

Energy levels restored, I retrieved my luggage from the hotel and set out for one of my last long train journeys on this particular trip to Japan.

The first leg took me from Matsumoto to Nagano on the Shinano limited express service. This was the same service (not necessarily the exact same train of course) I travelled on from Kyōto to Matsumoto, and having learnt my lesson from last time I made certain to book a front-row seat. The result: excellent views out through the driver’s compartment for the duration of the trip. 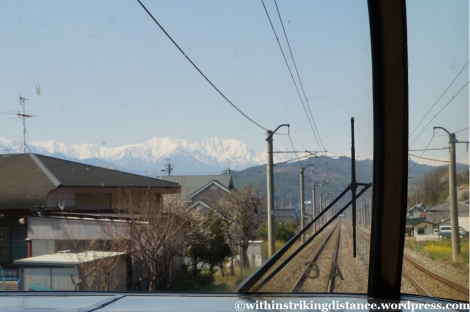 At Nagano Station, I transferred to the shinkansen on the Asama service to Tōkyō.

About an hour and a half later, I was in the Japanese capital and ready to begin the final phase of my trip. Of course, the last few hours before bedtime were spent on a quick visit to a place that fellow anime enthusiasts know only too well.

Next on our itinerary: a day trip to Yokohama.

Ordered stuff from Amazon Japan for the first time in years. This wouldn’t have been necessary were it not for this darned pandemic, since I used to fly there twice or more every year and it was always easier to buy books or anime merchandise or whatever else I wanted during those visits. Can’t wait to raid Maruzen and Kinokuniya and Animate and Mandarake and that fantastic but expensive shop in Tōkyō National Museum and all my other usual haunts IN PERSON once this awful emergency is over. 😆
お帰り、#しまりん 。#ゆるキャン
Took a while for these to get here. Time to put them through their paces. #apple #airtag
Concéde, quǽsumus, omnípotens Deus: ut, qui hodiérna die Unigénitum tuum, Redemptórem nostrum, ad cœlos ascendísse crédimus; ipsi quoque mente in cœléstibus habitémus. #ascension #ascensionthursday #ascensionalwaysfallsonathursdayneveronasunday
“And you therefore have sorrow now; but I will see you again, and your heart shall rejoice, and your joy no one shall take from you.” #easter
A sneak peek at my current Sims 4 build (still far from finished). The idea is that they’ve built a modern museum building all around an old, historic structure to keep it safe from the elements. #sims4 #sims4 #sims4build
Sancte Joseph, ora pro nobis. #stjoseph
My potato PC was all spud and no speed today, so I couldn’t squeeze out more than these few shots of a new Sims 4 build. More to follow next time, if I can get the hardware to cooperate. Now I’m not really keen on contemporary architecture, but I decided that my fictional wealthy European microstate would have put up a ghastly modern showpiece or two at some point in its history - hence this giant, er, ice cube. Fictional background story: “NEUE KANZLEI (New Chancellery): Home of the Kanzleramt (Chancellor’s Office) and the Ministerium für Auswärtige Angelegenheiten (Ministry of Foreign Affairs) of the Grand Duchy of Brückenburg. Completed in 2012, this building is the first example of modern architecture to rise in Brückenburg’s central government district.” #sims #sims4 #sims4build