As expected, this short regional flight featured Cathay’s older, somewhat bare-bones business class seat. Three control switches on the edge of one armrest allowed for some degree of customisation. My seat was quite comfortable and seemingly well maintained, though recline was rather limited, and the footrest barely budged (could have been a defective seat but I saw at least one other in a similar condition). Smallish tray table folded into one armrest, IFE screen stowed in the other. 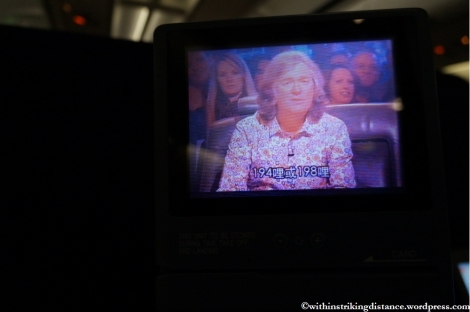 Old plane, old seat, old system. IFE consisted of a bulky, low-res monitor packed underneath one armrest, with control achieved via a remote control-type keypad. The headphones provided were of the typical flimsy type; they certainly didn’t look or perform like noise-cancelling units. Video selections appeared to consist mainly of TV series – no real complaints on that point as it was such a short flight.

Dinner options consisted of the following (taken straight from the menu card):

For the main course, I went for the beef (an easy choice to make as I don’t normally eat seafood). 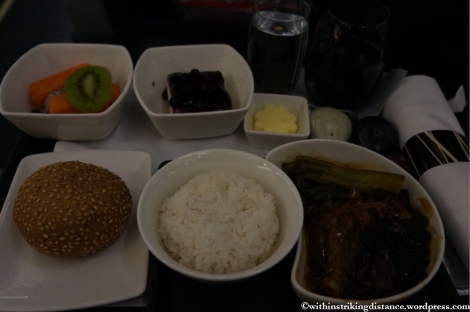 Not bad, though I recall thinking the meat was a bit too fatty and trimming off some of the excess with my knife.

Dessert: not bad, but was rather bland and lacking in texture. I’d hoped for a rather dense cheesecake and instead bit into something with the consistency of pudding.

Cathay’s inflight cellar featured a good range of wine and spirits. I chose the Gemtree Bloodstone McLaren Vale Shiraz 2010 to go with my main course, and later sipped on a glass of Dow’s Late Bottled Vintage Port 2007 together with dessert. Not bad, not bad at all.

In short (as might be quite apparent from my frequent use of the same two words): not bad. Slightly on the “disappointing” side, perhaps.

Courteous and professional from gate to seat. An attendant offered to hang my jacket – nice touch – and we were given a choice of pre-flight beverages within minutes of boarding. Water, juice, and champagne were available. Blankets (nice and soft) were handed out shortly afterwards, followed by newspapers (local and international) and hot towels (more lukewarm than hot, though perhaps I’d simply waited too long before using mine).

After my jacket was taken away, I traded places with someone who wanted to sit with her travelling companion. She had a quick word with a flight attendant and, as we were landing, my jacket was correctly returned to me at my new seat.

Strong on the soft side of service, merely satisfactory on the hard product. The catering could be improved, but of course, I’m quite happy to have been offered a meal in the first place (I’ve travelled with CX on this same route in economy and I believe all one could hope for in the rear section was a hot roll of some kind). I’m pretty much on the fence here, but if pressed for an opinion, I’d say I was quite satisfied and will gladly fly with CX again, provided the prices are competitive.